Wow, time really flew by. 3 months of 2015 gone by just like that! The past 3 months have been fun as usual; once again very grateful to my friends and customers especially those who have enjoyed my baked goodies previously and ordered from me again =D

Here's a summary of some of my baked goodies :)

First of all, dear son's 5th birthday celebration at his childcare centre. After discussing with his teachers, instead of just the usual birthday song/cake-cutting, we decided to let all the children be involved and have fun decorating their own cupcakes! 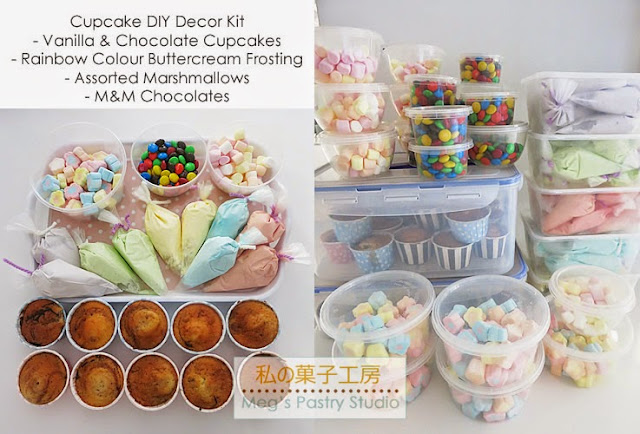 There were close to 40+ children in the childcare centre, so I made 50 vanilla-chocolate marble cupcakes and prepared 50 mini bags of buttercream frosting, as well as M&M chocolates and assorted marshmallow. The celebration was a blast! We started off with a simple birthday song/cake-cutting. Then dear son took over and demonstrated to his friends how to frost and decorate the cupcakes. It was hilarious to watch as he looked really serious during the demo, just like a little teacher. Anyways, all the kids had fun and they were so proud of their own work, which they got to eat too :) Very grateful to the teachers who were so supportive!

The cupcake DIY decor kit is available for orders and can be customised accordingly. Do drop me an email if interested :) 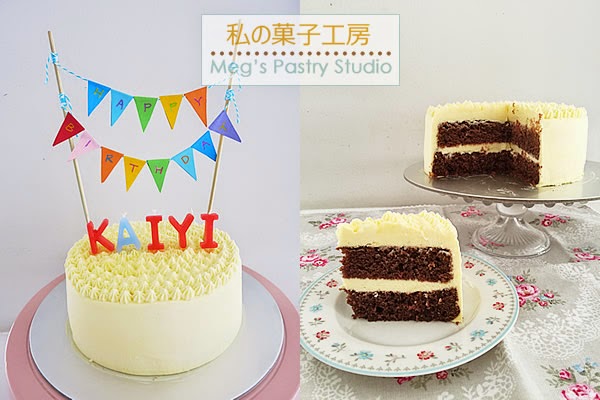 And so, since the children already had their own cupcakes, I just baked a simple Red Velvet Cake with Cream Cheese Frosting for the cake-cutting. This version of Red Velvet is moist, dense yet tender with a subtle taste of chocolate, and perfectly complemented by a rich cream cheese frosting. 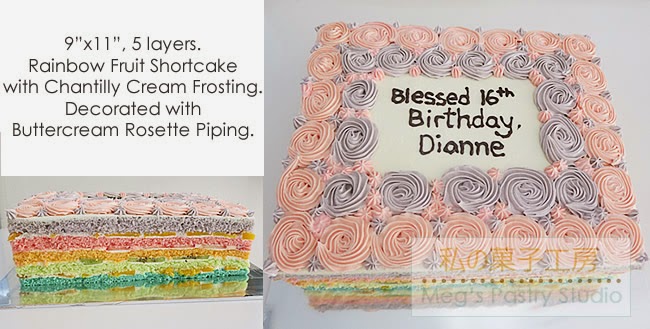 This lovely rainbow cake was ordered by a mum for her daughter's sweet 16 birthday. Instead of the usual fruit decoration on top of the cake, I piped some pink and purple rosettes using buttercream to make the cake look more dainty and girly. 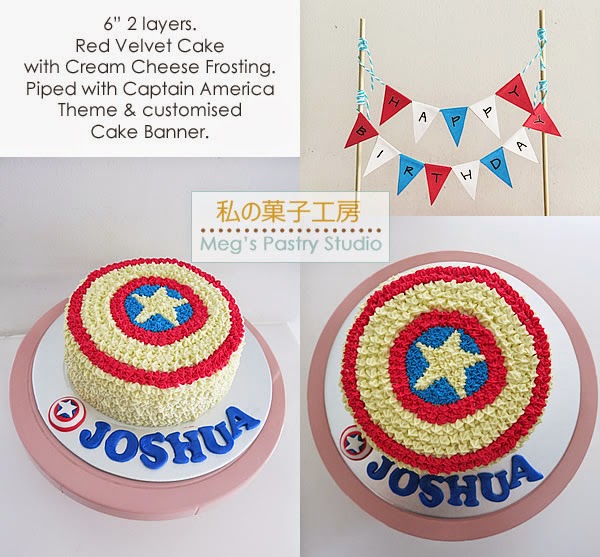 This Captain America theme cake was ordered by my Secondary School friend for her son's birthday. When she approached me for a themed cake, I was hesitant because I usually don't do themes or fondant. At most, I would go along with a colour scheme that's close to the theme and get cake toppers. So in the end, after taking reference from Instagram, decided to pipe the cake with Captain America's signature shield and do a miniature shield using fondant. As I used cream cheese, I couldn't achieve the supposedly white colour of the shield so it became an off-white/beige colour. Nevertheless very glad that my friend and her family liked the cake. 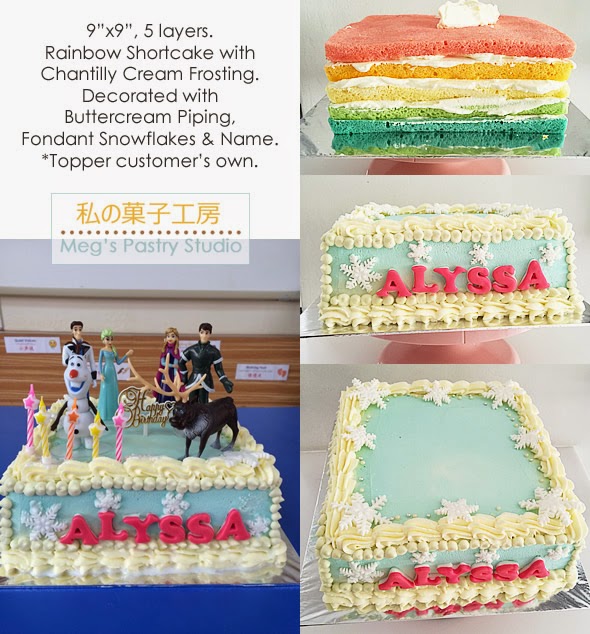 This pretty Frozen themed cake was ordered by a mummy whom I met at a playgroup few years back when I brought dear son for lessons there. She managed to source the cake toppers so I designed a base cake with the Frozen theme. The sponge layers were rainbow colours and the chantilly cream tinted light blue. The piping was done using buttercream so it was beige/off-white instead of pure white. Unless I use non-dairy whipping cream, pure white couldn't be achieved. But I don't do non-dairy so have to make do with the off-white colour. (Couldn't use chantilly cream which is close to white because it melts more easily and the piping designs wouldn't be able to stay visible). I also added some fondant snowflakes and dragees to make it closer to the theme. Had to borrow the snowflake fondant cutter from a friend as the bakeware shops I went to were out of stock for the cutter. Thank you to E for the loan!

Anyways, I think the cake turned out well and the birthday girl liked it :) 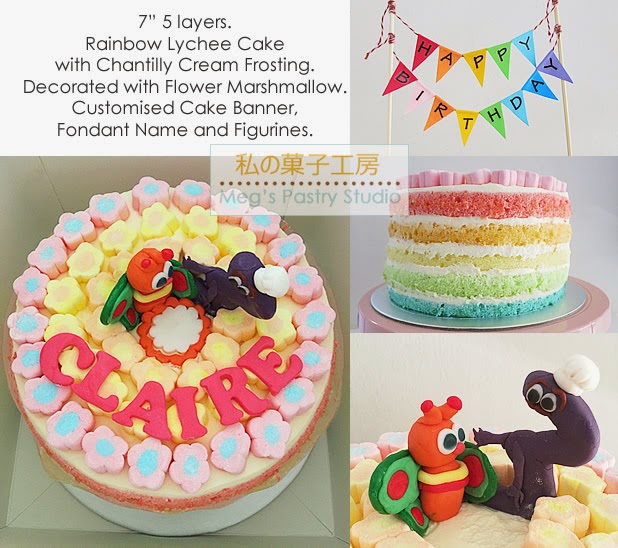 A sweet little cake ordered by my Uni/Hall friend for her daughter's birthday. Her daughter likes the Butterfly character from BabyTV and she asked me if I could incorporate the character onto the cake. Initially I proposed using cut-outs and stick the cut-outs onto the cake (using satay sticks). After some discussion, she asked me if I could just make a simple fondant figurine of the number "3" (from BabyTV). Although I used fondant to cut out names once in a while, this was my first time making a proper figurine so I wasn't confident. In the end I decided to make a butterfly as well. I certainly need more practice. Glad that my friend didn't mind how the figurines turned out, and they enjoyed the cake very much. 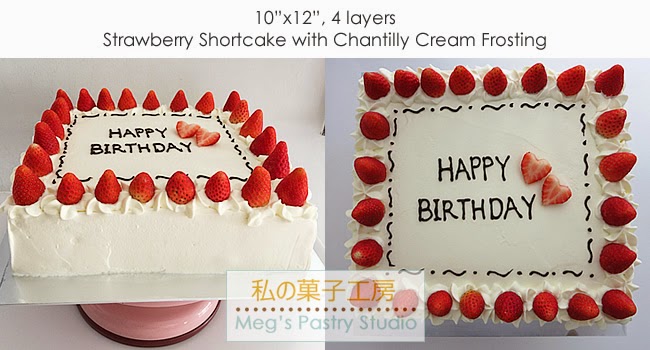 A simple strawberry shortcake with chantilly cream frosting ordered by a very supportive friend for his office's monthly birthday celebration. 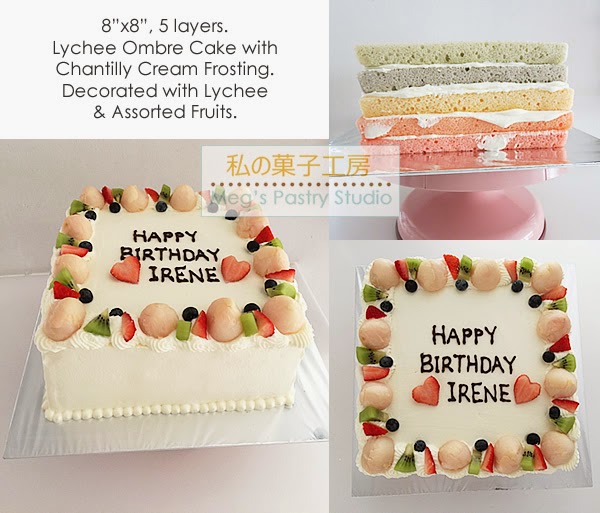 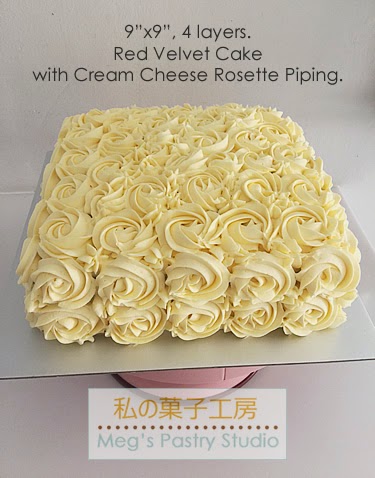 This cake was ordered for an office birthday celebration. A simple and elegant red velvet cake with rosette cream cheese piping.

This cake was ordered by a mummy for her son's 3rd birthday. The cake layers were ombre shades from beige to pink (I forgot to take a photo!). Once again, enjoyed by all the children. 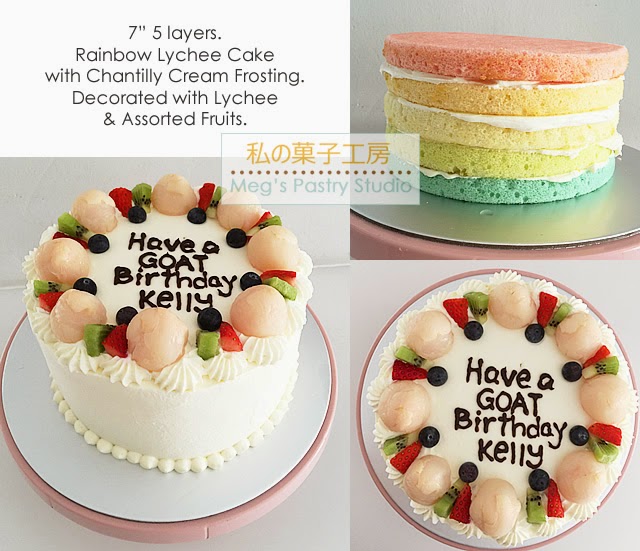 This cake was ordered by a hubby for his wife. His wife, Kelly had actually ordered the same cake from me a few months back for her hubby and now it's his turn to order. They liked the previous cake very much and so ordered the exact same cake!


Looking forward to more orders in the coming months!
Posted by daydreamer at 11:38 PM

Email ThisBlogThis!Share to TwitterShare to FacebookShare to Pinterest
Labels: Cake

Send me an email at megtan@singnet.com.sg